One of my favourite episodes of South Park is A Nightmare on Face Time, the one where Randy buys a video store and it’s full of ghosts because “video stores are so old now”. Little kids passing by don’t know what DVDs are and think the video store is creepy. It’s a great episode! (Ironically, you should totally check it out online!)

But it’s so sad that video stores are all but gone. I understand Netflix and Hulu et all are more convenient and don’t charge late fees, but there was something really magical about video stores. Check out Kathleen Winter’s short documentary DVD Dreams if you don’t believe me. And of course Michael Gondry’s Be Kind Rewind. Remember that annoying feeling when you got home and the VHS wasn’t rewound? Or even worse – the DVD was scratched?!

However, it wasn’t just the movies or being able to hold them in your hand that made video stores so wonderful, it was the people. I worked in two video stores in my time, one in Auckland and one in Wellington, and both brought me into contact with some of the nicest, strangest, and most hilarious and magnificent people I’ve ever met! Characters who themselves belong in movies.

‘Working’ alongside my colleague Nic Sando in 2009

It also was the conversations that made video stores so great. I could talk for hours and hours to all sorts of people about all sorts of films, so much so that I probably got a better education in cinema from working in video stores than by going to film school. Quentin Tarantino famously learnt his craft by working in a video store and it was thanks to video stores that I learnt about him and Scorsese and Coppola, Godard, Almodóvar, Solondz, Paul Thomas Anderson, STANLEY KUBRICK.

But where can you go to have those conversations now? On social media? That horrific combination of websites that make celebrities of everyday people and everyday people of celebrities? The Internet, for all its accessibility and connectivity, has no heart. Netflix will never love cinema the way us weirdoes at the video stores of the world once did.

I suppose you can have those conversations at cinemas themselves or at festivals, but I dunno, it just doesn’t feel the same. Pale misfits don’t go much for networking and crowds. Cinemas are the book launch, you go in, get wowed, maybe make a passing comment to someone you know as you leave. But video stores were like the library.

Who knows, maybe they’ll come back someday? After all, record stores still exist.

I do know of a couple of people for certain, however, that definitely don’t share my nostalgia for video stores. And it isn’t because of their love of the relentless march of technology and change…

The first is a woman who I had to call because she had late fees. Usual call, “Hey, sorry to bother you, just ringing to let you know your videos are overdue.” At first I thought she was just playing dumb, “Sorry but I haven’t rented any videos.” Then she asked, “What are they?” I check her account and see that the overdue film is porno. There are some people milling about in the store, so I discreetly say, “Ah, it’s an adult film.” She seems genuinely surprised, “An adult film? I haven’t rented any adult films. What’s it called?” I go into her account and find out it’s The Cockfather. 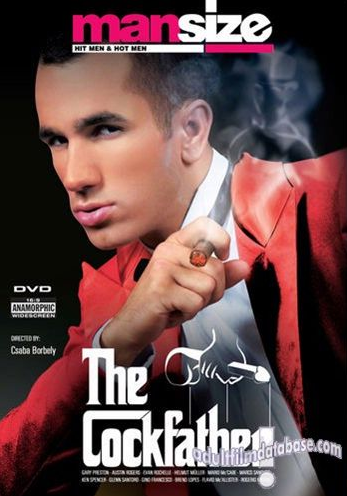 (Note: the hand usually holding the puppet strings symbolising of the nefarious power of the mafia is holding something else)

Yes, that’s a real film. I won’t post the cover here, but there are carrots. Google it if you must.

Anyway, I start scanning his DVDs and come to the empty case of The Cockfather. “I just have to get the disk for this one”, I tell him. He looks over his shoulder nervously as a line of other customers slowly begins to form. His eyes dart from his porn on full display to the floor. I feel his pain, so I quickly go to search for this apparent pornographic masterpiece, wondering if it also employs Gordon Willis’ dramatic use of darkness to illuminate. Only, I can’t find the damn thing! It’s not under C where all the other cock-titled films are! I search and search.

A female coworker eventually comes over and asks, “What are you looking for?” “The Cockfather“, I tell her, “I’m looking for The Cockfather.” “Have you looked under C?” she asks. “Yeah, but I can’t find it”, I say with an increasing sense of urgency. She starts looking too but she can’t find it either!

Maybe a minute later, or a hundred years, our manager came along. “What’s going on, guys?” he asks us. “We’re looking for The Cockfather“, I say in hushed desperation, “But it doesn’t seem to be anywhere.” “Have you looked under C?” he asks.

Meanwhile, back at the counter, Sam is starting to sweat bullets. The fluorescent lighting overhead and the gunfire coming form the nearby widescreen TV are only heightening his sense of paranoia, shame, and complete indignity. Then, to make matters worse, someone in the cue recognises him and picks this moment to engage in smalltalk. Let’s call her Sally.

“Here it is!” my manager says as he finds the disk, “Someone put it under G.” He hands me the disk and I go back to the counter.

I speedily complete the rest of Sam’s transaction of humiliation and ask him if he wants a bag for his… rentals. He says, “I’ve already got one”, and pulls out a scrunched up plastic bag from the pocket of his hoodie. I’d rather not touch this bag but I don’t have much choice. I go to put his DVDs in his bag – and there’s a tissue inside. He knows I saw it.

Then, to finish off this train wreck of an encounter, as he was leaving the store, I would’ve said it to everyone that night, it becomes habit, I said, “Have a good night, mate.”

Actually, now that I think about it, maybe it’s a good thing video stores are a thing of the past.