It was brutal. Every bit as tough as I thought it would be – and then some.

Early on Sunday morning, my dad waited with me at the start line by the stadium for the Wellington marathon to begin. It was cold and the sun was still waiting to rise over the harbour in the east, but thankfully it wasn’t windy. Of all the things I was worried about, the infamous Wellington wind was the most uncontrollable. A strong gale force wind was my nightmare scenario, a nail in the coffin. Thankfully it was still, so the rest was going to be up to me.

Dad was walking the half marathon event which was starting an hour later, so as the race begun, I told him I would see him soon and set off.

Running down the empty quays of sleepy Wellington was lovely. My Uncle Nick in Tokyo, who had just completed an ultra marathon in South Africa, had been coaching me through the last few weeks and gave me a strict race plan to stick to. I wasn’t to run the first 10km in less than 70 minutes. I wasn’t to reach 20km until 2 hours, 15 minutes. I had to pace myself. He said a lot of people would pass me by and that that was fine. This race wasn’t about getting it done quickly, but simply getting it done. And if there is anything I’ve learnt from Japanese cinema, it’s that you must always listen to your sensei. I wrote his times and distances on the back of my hand before the race.

As I was coming around Oriental Bay, the sun finally broke free from the hills and the most amazing deluge of golden light covered the harbour. Everything was going to plan and I was feeling good. Around Evans Bay is when some of the characters started appearing. First, there was the guy running inside a cardboard aeroplane costume that he was carrying with his arms at his sides. Then there was the guy who was skipping instead of running. The ones that really got me though were the two women who were gossiping about their families as they ran. Their chatter was impossibly irritating, but thankfully they stopped at the first public toilet where they got into separate portaloos and kept fucking talking.

Anyway, I got to the 10km mark on schedule and started the Shelly Bay stretch of the race. This is where I first saw the two guys who were leading the race. They had already been to Scorching Bay and back. They looked like absolute machines. The winner ended up crossing the finish line in 2 hours and 22 minutes. Lightning.

I finally made it to Scorching Bay myself, the 15km mark, where I saw my mum and my sister Rachael waiting for me. Seeing them was great. I still had plenty left in the tank. The route of the Wellington marathon doubles back on itself a little in this patch, so I saw the leaders zip past me a second time before making it back to Shelly Bay and the 20km mark. Turning back around, I hit Scorching Bay for the second and final time, before running past mum and Rachael again and beginning the long haul back to the stadium.

I hit the 30km mark just 2 minutes behind schedule. My body was sore, it knew it had just run 30km, but it was still holding up. But something Uncle Nick had told me a few days ago ensured I didn’t drop my guard – “A marathon truly begins at 36km”.

This is where the ‘wall’ lies in waiting. It hit me like a black wave and nearly everything ground to a halt. Rachael and mum had driven to the 34km mark to cheer me on but I shook my head as I ran past them, letting them know I was hurting. They called out to say they’d see me at the stadium. If that was going to turn out to be true, I was going to have to break through the wall.

Most people who bail on a marathon do so at this point. I was bitterly close to quitting. It was devastatingly tough. My legs felt like they were about to collapse, my feet were blistered to hell, and to make the wall that much more solid – the Wellington wind arrived. I was now 30-40 minutes behind my time and the wind was slamming me head on. Every part of me wanted to give up. Somehow, I had to find the strength to keep running.

This is when I remembered why I was doing this crazy bastard of a run to begin with. Through the kindness of friends of family, I had raised over a thousand dollars for the Mental Health Foundation of NZ. But there was a reason I had chosen this charity to support. I have been in and out of the dumps of mental health issues for a decade and this was my way of proving to myself and everyone else that I will overcome this. One day at a time. One step at a time. There wasn’t going to be anybody on this stretch of the race to cheer me. This had to be done by me and by me alone.

I’m not really sure how, but I kept running.

Coming around the bend into Oriental Bay, where I could finally see the stadium on the other side of the harbour, Mt Victoria then gave me a sharp shelter from the wind. I saw a road marker that said ‘4km to go’ and for the first time began to think, “I might actually make it”.

Then, just like they did when they were born, my two little nephews, Thomas and Jack, appeared on the horizon and instantly made me feel a hundred times better. My other sister Nicola and her husband Nathan had waited to surprise me at Oriental Bay. As I ran past them, Thomas and Jack gave me high fives and called out, “Go Uncle Dave! We know you can do it! Keep going!”

That was when I finally thought, “I am going to make it”.

Slowly and painfully, I traipsed my way along the Wellington waterfront, passing all the Sunday markets and finally making it to the stadium. My dad had waited for me after his half marathon at the finish line. 4 hours, 59 minutes after I said I’d see him soon, I finally made it – and just under the 5 hour mark!

Looking back on it, the whole race was a perfect metaphor for my battle with mental illness. It was one ugly, grueling dogfight, but it was ultimately won by the support of my family, near and far, and the power of determination. It was a pretty amazing experience, one that’s slowly been sinking now that my legs are beginning to work again.

A lot of old truths were reaffirmed for me. The main one being that family is what gets us through life. But also; always listen to your sensei, you never know what’s around the corner, some people skip through life, some people carry loads we can’t imagine carrying ourselves, and some people never shut up.

Oh! And a picture says a thousand words. 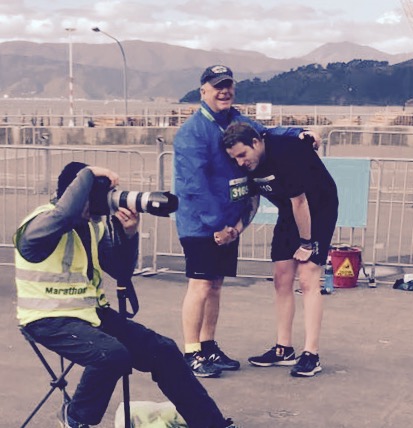 3 thoughts on “The Dogfight”